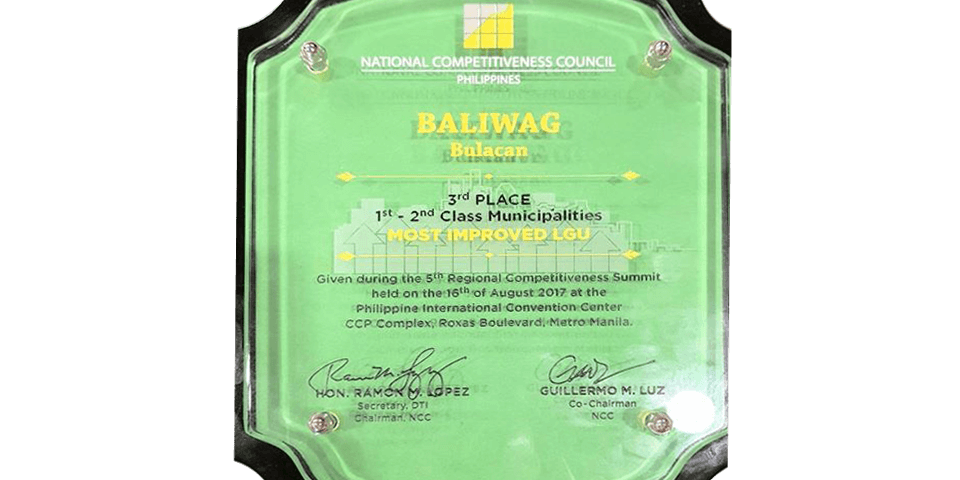 August 16, 2017 – The National Competitiveness Council recognized LGUs with exemplary performance in the four pillars of the Cities and Municipalities Competitiveness Index (CMCI) namely Economic Dynamism, Government Efficiency, Infrastructure and Resiliency.  The highlights of the event included the promotion of competitiveness in the country and also the announcement of the results of the 2017 index.  This year’s Summit theme is Government Automation:  Key to Ph Competitiveness.

Baliwag secured its position as the 3rd most improved LGU in 1st and 2nd Class Municipalities Category.  The Most Improved LGU award is conferred to a city and municipality which had the most number of leaps from the previous ranking.  Last year, Baliwag ranked 413th for 1st and 2nd  Class Municipalities up to 62nd  spot this year and  ranked 960th  for All Municipalities from 2016 up to 47th position this 2017.   Topping the said recognition category is Bongabon, Nueva Ecija and Paranas, Samar at second place.

Mayor Ferdie V. Estrella walked up the stage of the Philippine International Convention Center  to receive  the said award in behalf of the Municipality of  Baliwag.

Baliwag is the only Municipality from the Province of Bulacan which was included in the roster of awardees for this year.

This year’s CMCI surpassed the number of participants last year with 1487 LGUs, 145 of which are cities and 1342 are municipalities. These numbers were far behind 2013’s statistics when CMCI started  with only 285 or 17% of the LGUs in the country. Data used for the ranking were gathered with the Regional Competitive Committees which are composed of public and private sectors and the academe.

The CMCI is an annual ranking developed by NCC to encourage LGUs  in formulating programs to improve competitiveness and engage in investment promotions activities to attract investors and generate more jobs. It is supported by the United States Agency for International Development (USAID) and Globe Telecom.